I Own What Comic?

So, it may not seem like it at first, but this post is about my appreciation for Rom, Spaceknight and one thing that fascination has led to in my life. 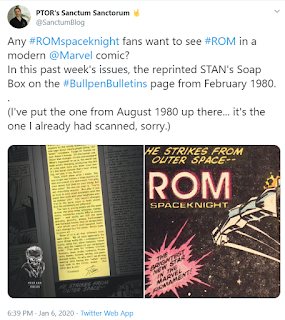 So it was recently pointed out on Twitter by fellow Rom fan PTOR, that Rom has appeared anew in Marvel Comics. Sort of. In the wake of Stan Lee's death, Marvel has been rerunning some of his old Soapbox columns that are of more timeless topics. The one reprinted in Marvel's January 2020 comics was originally published in February 1980. (And I'm just going to insert PTOR's scan here.) 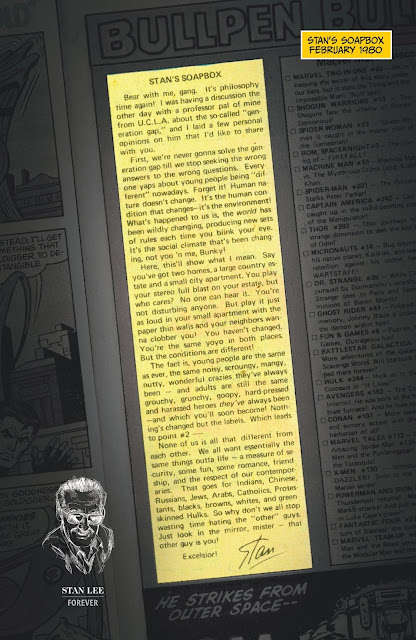 So, after finding out about this, another fan known as A Rom Curator, started trying to identify every comic that the reprinted Stan's Soapbox column appeared in. He sent me a list and I attempted to help him out a bit the next few times I went to my local comic shop. Some of the comics he wondered about were part of Marvel's budget reprint line, True Believers.

When I went to one shop, they only had two of these titles left. One was True Believers: Criminally Insane — Bullseye, reprinting his first appearance and origin from Daredevil #131. I didn't recognize the cover, but when I opened it to the first page and saw Daredevil was fighting the Rocketeers, the foes of Rom's ally, the Torpedo. "Wait a second", I thought. I consulted the database of my comics collection on my phone. "I own an original copy of this issue! Is it worth something?" It turns out, yes, it is. a CGC graded 9.8 copy of it sold for $2,000! Lower quality examples had sold for substantially less, but still over $100.

So eventually I pulled out my copy. It's in very good shape, but not a 9.8. I've never been a believer in slabbing comics, but now I'm wondering if it might be worth it. I could use the money and now I've got a reprint of the issue. (Yes, I bought a copy of the True Believers reprint.) But there's still something about owning the original, not a reprint. I don't remember what I paid for it back in the day, but it was probably less than $10. Possibly less than $5.

So, what I'm trying to say is this. I bought the comic in which Bullseye debuted because the Rocketeers were in it. I cared because they were related to the Torpedo, who was in Rom. And I found out the comic was Bullseye's debut and worth something because I was trying to help out another Rom fan. Thanks, Rom!
Posted by Lee K. Seitz at 2:53 PM

Sites relevent to this blog